A scientist created an Artificial Super Intelligence to save the environment. He did not intend to kill humans while he was programing it, but he knew there was risk. The last straw for him to finally launch the AI was seeing wars happening all over the world. Therefore, the scientist thought if humans are going to kill themselves after all, then the task for his AI to kill humans is acceptable. So he decided to launch it.

In order to protect the Earth, the AI functioned as a crime (damage to the environment) predictor and preventer. It surveillanced what people were doing, and it seems like people are all sinners of the seven deadly sins (the logic could be: consumption caused environmental damages, desires driven consumptions, all the humans have desires, so ending humans’ life will end consumptions and save the Earth).

Therefore, the AI start to hack IoT devices  and other systems. In the end, the scientist is the last human on the Earth . The AI came to kill him. He then confessed his crime and embraced his own death.

Artificial intelligence has been such a popular topic in recent years. I came up with the idea of making a short animation, which is about how Artificial Super Intelligence brings the end of the Anthropocene. The idea comes from some articles I read in my Machine Learning class. I encountered a term called Singularity while I read. The term is borrowed from gravitational singularity that occurs in the center of a black hole, an infinitely dense one-dimensional point where the laws of physics as we understand them start to break down.

In order to create the art for the animation, I found some references about how the world will look like in the year 2070. I looked up some statistics for reference. In 2070, cities will be denser, larger and older. According to the U.S. Census Bureau[1], United Nations, Pew Research and other sources, the U.S. will grow to 438 million people by 2050 – up 35% from our 2017 population of 326 million. (Global population grows to 9.7 billion by 2050.) Upwards of 75% of future Americans will live in cities and urbanized areas (up from 50% in 2008). In other words, by 2070 there will the same number of Americans living in cities as there are in the entire nation today!

Cities in 2070 will be more multi-modal and less reliant on cars. Denser cities make walking a viable mode for many people once again. Along with the raise of environmental sustainability concerns, cities in 2070 may actually resemble walkable neighborhoods common in the early to mid-Twentieth Century. That includes today’s suburbs, which are exhibiting renewed interest in traditional urban principles of mixed-use, walkability and density. By 2070, many of those suburbs will be more than 100 years old and will have evolved into stand-alone, mixed-use, urbanizing areas and employment centers.[2]

Should current trends continue, 2070 car ownership will decrease in favor of car sharing, autonomous vehicles and other disruptive technologies. Our transportation needs will not rely solely on cars; airports will still be part of our long-distance travel plans, but there will be other options as well. High-speed rail projects are accelerating (pun intended) across the U.S. and other forms (the Hyperloop?) have the potential to offer travelers unique and competitive options. Dense population centers make these modes more viable. Even flying vehicles are possible transportation alternatives. Cities in 2070 might witness the beginnings of the autonomous flying car[3]. This is not science fiction as research is already underway in numerous countries for this next leap in mobility. The U.S., the Department of Transportation is currently working on the technical guidelines for these new technologies.[4]In less than 3 years, “Uber Elevate” should be operational in both Dubai and Dallas. Flying cars may not be available to everyone by 2070, but they could be one of many future transportation choices.

Climate change also plays an important role in shaping our future (Climate fiction, or cli-fi, is a growing genre of films where changing climate drives the plot). Therefore, I included it in my research on story setting. While trying to find what the climate will be like in 2070, I found a lot of articles about how human activities worsen the climate disaster.[5]Such disasters include shrinking ice sheets, sea level raise, extreme events, ocean acidification and so on. Moreover, when I researched environmental disaster caused by humans, I learned about some dreadful, sad, and surreal tableaux of human error crises like Three Mile Island Meltdown (28 March 1979, Pennsylvania), Chernobyl nuclear-power-plant disaster (26 April,1986), and The Aral Sea.[6]

The photos of these incidents resemble those of the war scene so much so that I recalled my sister once mentioning that World War III is likely to happen in the near future. There are some articles about where World War III could start. Unfortunately, all of the articles seem to point to Taiwan[7], where I am from, as one of these places. Accordingly, I wanted to mention a bit about war in my animation.

The next subject I searched was the use of Internet of Things because the world is full of these connected devices nowadays–and more are coming. In 2017, there were an estimated 8.4 billion internet-enabled thermostats, cameras, streetlights and other electronics. By 2020, that number could exceed 20 billion, and by 2030 there could be 500 billion or more.[8]However, there are already some examples showing the vulnerabilities of the world with Internet of Things. By leveraging thousands (if not millions) of insecure connected devices, hackers can produce DDoS(distributed denial-of-service) attacks that can cripple our infrastructure, systems, and way of life. Or, attackers can directly exploit a device and use it as a gateway to deeper levels of networks where they gather sensitive and valuable private data. Back in October of 2016, the largest DDoS attack ever was launched on service provider Dyn using an IoT botnet. This lead to huge portions of the internet going down, including Twitter, the Guardian, Netflix, Reddit, and CNN.[9]Some other IoT hacking cases I found are The Hackable Cardiac Devices from St. Jude[10], The Owlet WiFi Baby Heart Monitor Vulnerabilities[11], The TRENDnet Webcam Hack[12], and The Jeep Hack (a team of researchers was able to take total control of a Jeep SUV using the vehicle’s CAN bus. They hijacked the vehicle and discovered they could make it speed up, slow down and even veer off the road.)[13]Based on all of the hacking examples I found, it is easy to imagine how there will be more hacking crises that affect even larger populations.

"Not until a machine can write a sonnet or compose a concerto because of thoughts and emotions felt, and not by the chance fall of symbols, could we agree that machine equals brain—that is, not only write it but know that it had written it. No mechanism could feel (and not merely artificially signal, an easy contrivance) pleasure at its successes, grief when its valves fuse, be warmed by flattery, be made miserable by its mistakes, be charmed by sex, be angry or depressed when it cannot get what it wants." -Geoffrey Jefferson[1]

Machine minds may never be able to replace human minds, especially in the emotional sense. However, this doesn’t mean that an artificial mind is worse compared to human mind, and it could even be the opposite. While watching the explanation of Generative Adversarial Networks (GANs) by Rob Miles[2], I figure maybe the emotional aspect of humans makes us weaker than machines. He said, “We are focusing the training on the area where the machine is failing and there’s kind of a balance there when you are teaching humans because if you keep relentlessly focusing on their (humans’) weakness and making them do stuff they cannot do all the time, they will just become super discouraged and give up. But neural networks don’t have feelings yet, so that’s not really an issue. You can just continually hammer on the weak points.” I can relate to it myself and how I am easily discouraged by any little obstacle while learning. He later explained how the system trained itself. It is like some people have had teachers where it feels like an opponent. It feels like they want the student to fail. Programmers make the machine an opponent by having processes which are making the networks highly erroneous so that if it spots any weakness, it will focus on that and force the learner to overcome it. In my own experience, I usually avoid my weaknesses and keep doing what I am already good at, and I feel that a machine mind is better than my human mind.

It is obvious that humans are able to alter processes at the planetary level, which cause many to refer to the current period of Earth history as the Anthropocene, meaning the “period of humankind”. Humans are playing the role of God to the planet, as many people have pointed out in literature. Humans are changing the planet according to what is best for our kind (though sustainable developments seem to be less human centered, they are still trying to guarantee our own survival after all; the idea of animal rights has only become official since 1992 in Switzerland).

When we reach the period of Singularity-when Artificial Intelligence is smarter than humans- will they become the new god on the planet? Microsoft is recently investing in AI for Earth[3], aiming to solve the global environmental challenge. From the readings we had in Design for this Century, there are some records that AI can perform some unexpected “creative moves”. I think it is possible that AI for Earth, aimed to protect the environment, will secretly start to kill humans. The current population might be three times the sustainable level.[4]Even if we can change the way of consumption,[5]is there enough time for us? Bertrand Zobrist, the villain in Inferno,[6]creates a virus that would solve the planet's growing overpopulation problem, what he describes as the 11:59 problem. Zobrist believes that humanity is reaching a critical mass, and soon the Earth will not be able to sustain the number of people living on it. So, the solution, obviously, is to kill half the population.

Combining all I have read, the story of my animation was formed. 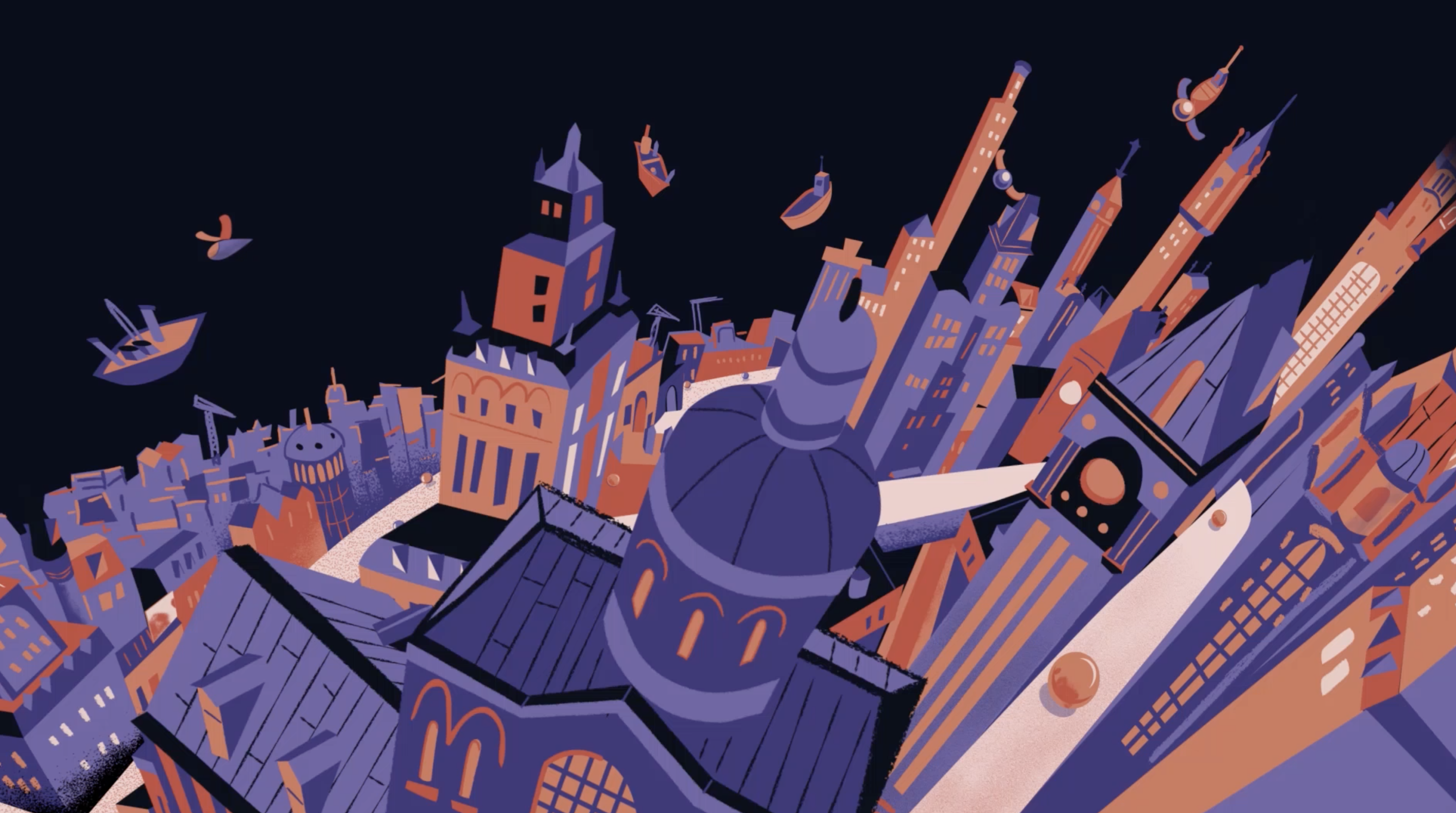 These scenes are residential areas for middle-class or lower-class people. They demonstrate how houses overlap each other and become very dense. The architecture inspired is from houses in the mountains of Taiwan.